We celebrate Mass at St Thomas More each Sunday at 8:45am and each Thursday at 9:30am. All are welcome.

Thursday Mass times may sometimes be subject to change, so please refer to the latest newsletter.

Confession is available 5.30pm to 5.50pm on Saturdays (at St Swithun's) or by appointment at other times.

Of all England's saints, Sir Thomas More is one whose appearance and character is best known to us. There are the portrait and sketches by the great German artist Hans Holbein and we have lively first hand accounts of his life and personality by More's own son-in-law Roper and his friend the scholar Erasmus. There are, also, More's own writings, especially his letters so lovingly preserved by friends and relations. According to a Times editorial on the 500th anniversary of his birth "if the English people were to set a test to justify their history and civilization by the example of one man then it is Sir Thomas More whom they would perhaps choose." We may think of him in the same breath as "greats" such as Churchill, King Alfred, Queen Elizabeth I, or Nelson. His Englishness shines through - his dry, ironic sense of humour, his practical business interests, love of family and friends (and pets), the pleasure he got from his country home and gardens on the river at Chelsea, and his passion for truth and justice combined with an innate humility. 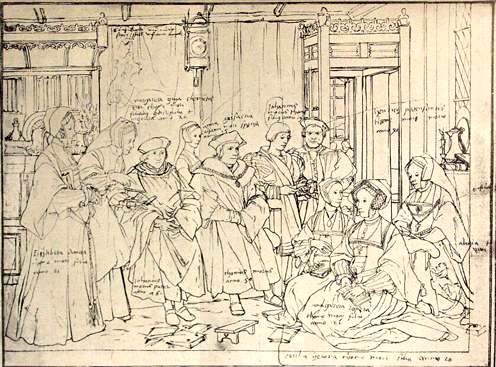 We may feel we live in uniquely different times; our Christian faith and heritage under threat, not only from outside but also from within the so-called "establishment"; those educators, administrators, politicians and the media who set aside Christian beliefs as of no consequence, nothing more than a personal whim. But if we feel under threat, what about the turmoil which overtook Christendom in Tudor times? Then too, Islam was threatening the very existence of European Christendom and the faith itself was divided and crumbling as the doctrines of Luther and the Reformers gnawed away at the basics of ordinary peoples' beliefs.

It was in this climate that King Henry VIII, in his desperate bid for a male heir, divorced his queen, Catherine of Aragon, in favour of Anne Boleyn and in the process set himself in direct opposition to the Pope to the extent that he had himself declared "Supreme Head of the Church and Clergy in England", denial of which was made treasonable. With a handful of exceptions (e.g. St John Fisher) the church hierarchy caved in to Henry's bullying and accepted the King's self-appointed role.

At this time Sir Thomas More was one of the most respected lay figures in Europe: an eminent lawyer, businessman, MP, Speaker of the House of Commons, diplomat, Lord Chancellor, international scholar and author renowned for his wit, learning and, above all, his honesty. No wonder the king wanted More's support, but he pointedly refused to give it. He declined to attend Henry's wedding and, after much deliberation, refused to take the Oath required by law acknowledging Henry as Head of the Church, knowing full well that this could lead to his execution as a traitor.

Thomas More was consigned to the Tower of London in April 1534, but steadfastly refused to take the Oath and eventually was beheaded on Tower Hill in July 1535, declaring he was "the King's good servant, but God's first". 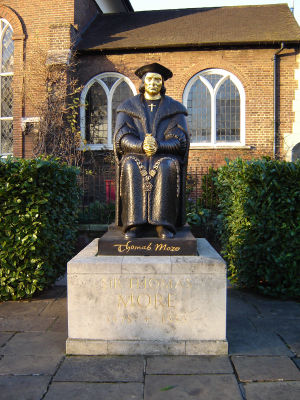 Here was a man who was humane, wise and witty, undeviatingly honest in his dealings as a lawyer and judge, beloved husband, father and friend, but with so firm a conscience he would rather die than bow to a ruthless dictator on a matter of faith. No wonder he has been honoured not only within the Roman Catholic Church, but by all denominations and by non-Christians. Today, on Cheyne Walk in Chelsea near Battersea Bridge on the edge of what was then his estate there stands a fine statue dedicated by representatives of the Catholic, Anglican and Free Churches, and the Speaker of the House of Commons, to "Sir Thomas More 1478-1535, Scholar, statesman, Saint". At the feet of the seated figure, reproduced in gilt, is his signature. Simply putting that signature to the Oath would have saved his life, but he could not betray his faith and conscience.